By continuing on our website, you agree to our use of the cookie for statistical and personalization purpose. Learn More

Despite its superpower status, the U.S. is simply not organized to control a pandemic like COVID-19. Read a new op-ed that argues for greater federal authority to face a crisis of this scale.

As the world continues to battle the COVID-19 pandemic, new findings from the 2021 Commonwealth Fund International Health Policy Survey show that older adults in the United States have suffered the most economically compared to their counterparts in other wealthy countries. Nearly one in five (19%) older Americans in the survey reported they used up their savings or lost their main source of income because of the pandemic — four to six times higher than rates in Germany (3%), Switzerland (4%), the Netherlands (5%), Norway (5%), and Sweden (5%). 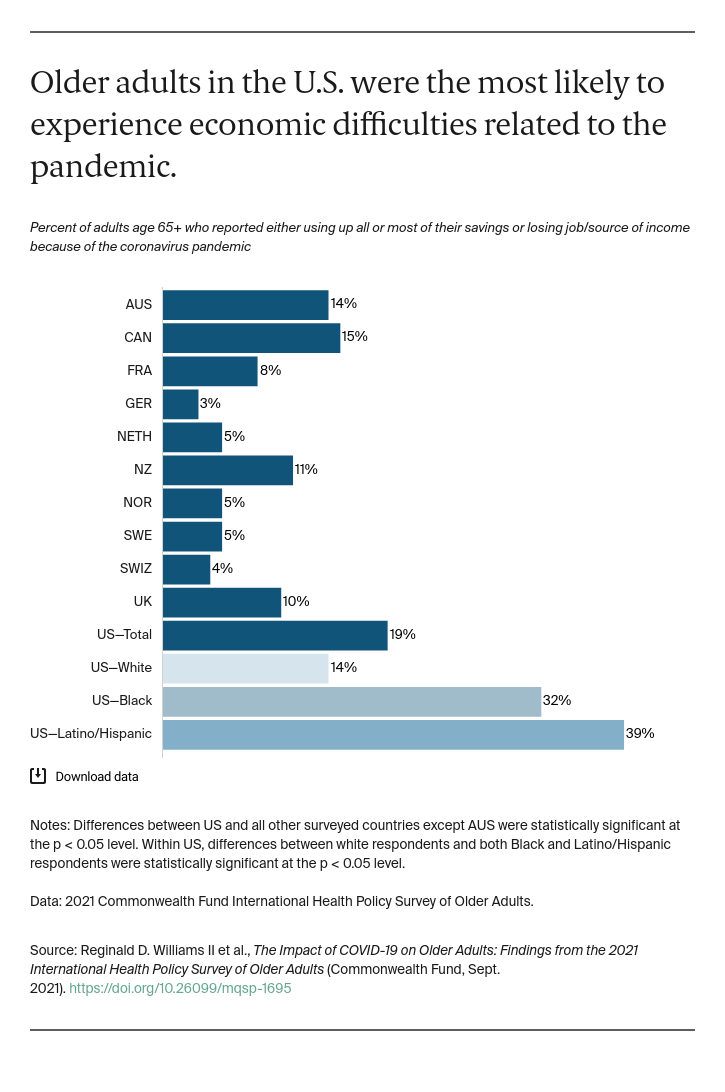 Fielded between March and June 2021, the survey analyzed responses of more than 18,000 adults age 65 and older in Australia, Canada, France, Germany, the Netherlands, New Zealand, Norway, Sweden, Switzerland, the United Kingdom, and adults age 60 and older in the United States. Findings reveal how COVID-19 has affected the economic security of older adults as well as their access to health care and supportive services for chronic conditions. The survey responses also highlight the state of vaccination for older adults during the second quarter of 2021.

Based on the survey findings, authors of the Commonwealth Fund study highlight the following opportunities to help reduce the pandemic’s burden on older Americans while addressing their most pressing short- and long-term health care needs:

“This study makes it clear that COVID-19’s impact on older adults goes well beyond their higher risk for serious infection. The chronic lack of economic security facing seniors in the United States, especially those who are Black or Latino/Hispanic, is exacerbating the devastating toll. The richest nation on earth can afford to address the underlying social and racial inequities driving these disparities to ensure affordable, quality health care is within reach for all Americans during a global pandemic.”

“As the number of confirmed COVID-19 cases and deaths in the U.S. continues to increase with the Delta variant, policymakers at all levels of government can look abroad for innovative solutions. This study highlights the urgent need to improve access to social services for older adults, strengthen Medicare protections, and address our country’s long-standing income inequality.”

How We Conducted This Study

The 2021 Commonwealth Fund International Health Policy Survey of Older Adults was conducted from March 1 to June 14, 2021, by SSRS, a U.S. survey research firm, and contractors in the other countries. The survey was administered to a nationally representative sample of adults age 65 and older in Australia, Canada, France, Germany, the Netherlands, New Zealand, Norway, Sweden, Switzerland, and the United Kingdom and of adults age 60 and older in the United States.

A common questionnaire was developed, translated, adapted, and adjusted for country-specific wording as needed. Not all questions were asked in each country (as noted in the report exhibits). Interviewers were trained to conduct interviews using a standardized protocol. Response rates varied from 7.2 percent in the United Kingdom to 47.7 percent in Switzerland.

International partners joined with the Commonwealth Fund to sponsor surveys, and some countries supported the use of expanded samples to enable within- country analyses. Data were weighted to ensure that the final outcome was representative of the adult population in each country. Weighting procedures considered sample design, probability of selection, and systematic nonresponse across known population parameters, including region, sex, age, education, and other demographic characteristics deemed consistent with standards for each country. In the U.S., weighted variables also included race and ethnicity.

The margin of sample error for the 2021 International Health Policy Survey of Older Adults was approximately +/– 2 percent for Canada and Sweden; +/– 3 percent for France, Germany, Switzerland, and the United States; +/– 4 percent for the Netherlands and the United Kingdom; +/– 5 percent for Australia and New Zealand; and +/– 6 percent for Norway, all at the 95 percent confidence interval.

The Impact of COVID-19 on Older Adults